Low budget Canadian horror. I didn’t understand quite what happened right at the end, but this one did a great job of creeping dread. It builds wonderfully, and has a moment with a television set that was astoundingly creepy on so many levels.

It has some issues, I wasn’t fond of some of the characterisation and such, but over all, I was really impressed by it. It’s not for everyone, and quite nasty and gory at times, but even that is well handled. There are times when they show the gore, and times when they make sure you know bad stuff is happening but don’t show it to you. An awful lot of films could learn from their approach.

All up an interesting and creepy low budget film.

Also called Spiral or Vortex, this Japanese film helped me to identify the problems I had with the next two films I watched. It also spoiled them a little, by being so damned good. Stylish, clever, absurd, and creepy, the direction in this is excellent.

The inhabitants slowly become obsessed with spirals, manifesting in madness and even physical changes. That’s the story. And it drags you through a slowly pervasive and deepening madness often in very subtle ways. Occasionally out of the corner of your eye you’ll spot a bit of scenery slowly twist into a spiral. It’s brilliantly done. It’s obvious when you spot it, but its also used sparingly and with great restraint.

The effect is, you start actively looking for spirals. The director has dragged you into the same madness that is experienced by the characters.

There are also times where the film gets ridiculously over the top and silly, but that’s fine. It makes you laugh, but it doesn’t relieve you from the dread.

Of all the films watched up to Red Sands, this is the one that for me best fit the feel of an indifferent power driving people insane. Apparently it’s based on a manga. Have no idea how it is as an adaptation, but it was good enough that I’d like to track down the original work.

Made by the H.P. Lovecraft Historical Society like The Whisperer in Darkness. This one is done as a late 1920’s silent movie. Not quite as polished as their other production (this was made first) it’s still a good and interesting adaptation of the work. I have read the original story this was based upon, and it certainly hit all the major notes I remembered.

It didn’t draw me in quite as much, I didn’t find this quite as creepy, but that may well be the story itself. Certainly it’s worth a look and is a noble experiment. Again, it uses a mixture of techniques to tell its story, even including a some stop motion animation amongst the computer graphics.

Both films are well worth tracking down from the store and checking out. They don’t cost much, and they are interesting, especially because they show a certain level of craft and originality of approach.

Haven’t watched a lot of films this year, but in recent weeks I’ve been on something of a cosmic horror binge.

There are a few definitions of cosmic horror out there. H.P. Lovecraft is the name you’ll most often find associated with the genre, given he was one of the major people who defined it, though even he was inspired by others.

A very simple definition is that something is wrong in the world/universe – we don’t know what, we don’t know how or why, and we don’t have any ability to make any lasting change, or to stop it affecting us.  It’s about the unimportance of humanity as it comes up against… something.

We don’t matter. It might manipulate or wipe us out without even being aware it’s doing it, or with the same level of thought as a child picking up and dropping an insect somewhere different just because they can. Not only do we not matter, but often the effect on us is simply unimportant to whatever it is.

After having rewatched John Carpenter’s In The Mouth of Madness, I did a little research and found a handful of lists of cosmic horror/Lovecraftian horror films. So now I’m slowly working my way through all that I’ve found.

I’m a firm believer in the less one knows about a film going in, the better. So below is the base list of what I’ve watched with a simple rating. For more details, and major spoilers for one or two, click the links.  It’s likely to keep me going for a while, so as I write little reviews, I’ll put links to them back here so there’s an easy place to access them all.

END_OF_DOCUMENT_TOKEN_TO_BE_REPLACED

One of two films made by the H.P. Lovecraft Historical Society. I like the approach of both, in that they looked to when the original short stories were written, then tried to film them in a way that echoed film-making from that time.

So this one is an early 1930’s film noir piece. My only complaint about the filming technique is that they don’t know quite how to work with black and white. There’s too many muted tones that show a lack of knowledge about what colours work with a black and white process, and there are small issues of contrast as well. But hell, major Hollywood film The Artist got the same stuff wrong.

I wanted to get my main complaint out of the way first, because I really liked this. I genuinely felt creeped out at times, and there was a growing sense of dread as the story progressed. It really is a very well done piece of film-making. It shows great restraint at times, and has a good feel for when to hint at things and when to finally show them.

Having not read the original story, I can’t say how faithful the adaptation is, but I suspect they’ve done a reasonable job. The effects work is well done too, using a wide range of techniques including computer graphics to mostly solid effect.

Overall, while not a perfect production, it is very, very good. 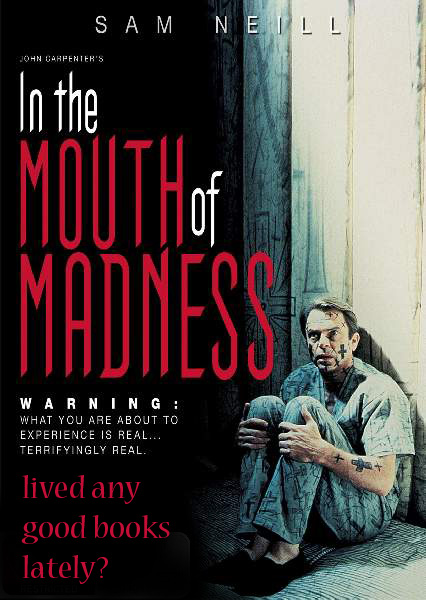 There’s an old rule of story-telling – show don’t tell. In The Mouth Of Madness keeps doing both. Sometimes hinting at something is vastly more effective. This likes to telegraph its punches. So when the main character tells us that the sweet little old lady at the hotel wouldn’t hurt a fly, then mentions that the fictional version of her was a killer, we already know she’s going to be found doing something odd.

Later we get the scene with her at the desk. At one point she obviously kicks someone below the desk and we hear a groan. And if it had been left at that, it might have worked. But no, we get given a shot of the naked man cuffed to her leg. The whole film is like that. Clumsily setting up things, then saying “Oh look! Look at how strange and weird everything is!”

I know some people like it, but for me, it failed.  And I really think a good portion of the problem comes from Carpenter’s choices.