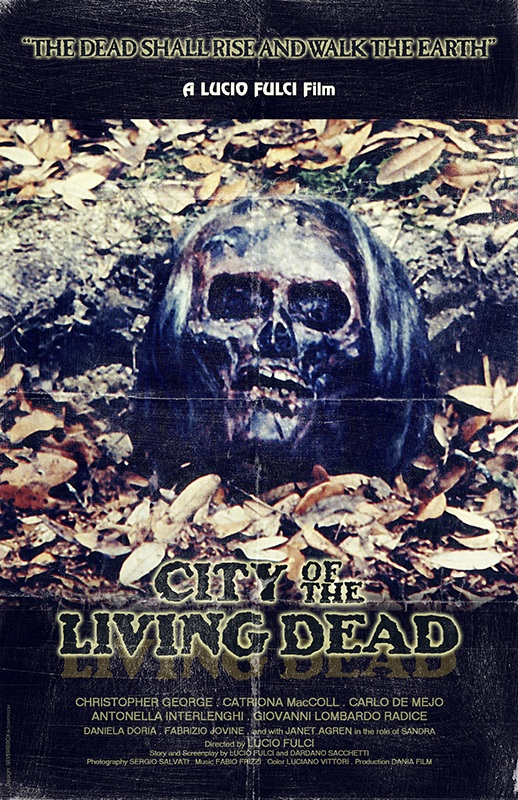 My first Italian cosmic horror. It has some obvious Lovecraft inspiration, given the name of the main town is Dunwich, but it’s very much its own thing. Whether or not you’ll like that thing is really a matter of taste.

Probably the most problematic aspect of City of the Living Dead for many people is it feels very disjointed. Seriously, things occasionally seem to happen for no other reason than they do, which at times means you’ll get a scene like the one where a zombie gets stabbed in the stomach and dies. I love surreal film-making, but even I had some issues with this. There doesn’t seem to be any logic to a chunk of it.

That said, this aspect is sort of in keeping with one of the concepts brought up with cosmic horror – we don’t understand or know what’s going on. I think it would be up to the individual viewer to figure out for themselves whether Lucio Fulci understood the background logic to why things occur or not. I’m guessing not. And honestly, once you get used to the disjointed nature of the film, I’m not sure that matters.

For me, I found the chopping and changing actually started to make me feel uneasy. It was a good enough film that I was involved, but I had no freaking idea what was going to happen next. There are many films where this would annoy me, but somehow here it worked to build tension.

It’s also quite a gruesome film with sequences that are fairly over the top. As an ex-meatworker I know offal, so when a character starts to vomit guts and the odd internal organ, I can tell they’ve used the real thing. Also a scene with literally thousands of maggots makes no sense, but is a hard watch because it goes on way past where it would be comfortable, and they’ve obviously used real maggots for all of it, including the ones spirit-gummed to actors’ faces.

Full credit to the bleeding eye effect, too. Never seen it done before in the way it’s handled in this film, and it really is quite effective. Took me a few minutes to figure out how they did it.

Sound design is also a feature of this one. Being 80s Italian I’m assuming, and it certainly sounds, like all the audio is dubbed on later. This does two things. It makes everything sound just a little off, and it means that the howls, screeches, and sloppy, squelchy noises are very loud and distinct, only adding to the dream-like nature of things.

All up, definitely not a film for everyone. I’m not sure I’d watch it again, but it still makes me feel uneasy, surely the hallmark of a good horror film. The ending… is in keeping with the rest of the film. It may not be satisfying, but given some things stated within the movie, it makes a kind of sense, albeit in a disjointed way.