Initial posting giving an overview of the project history here.

To find all the posts on this topic, please click here.

So, in previous posts I’ve shown you some of Nick’s sketches. I had made a go at designing a Doctor head early in the piece before Nick came on board.  I wasn’t happy with it – I tend to work better when working from something that exists as blueprint or design pictures and the like.  So my version came out pretty ugly.  In fact I didn’t even bother to do a test render, I was that unhappy with it.

I still have the original models, and their creation date shows as 15 Dec, 2002. Modelling organic shapes in a computer is hard.  Getting human shapes and especially human faces so that they don’t look off is difficult, and I think that was my first attempt at one since the Aussiecon 3 Opening Ceremony animation I did way back in 1999.

Five days later, I had another go, based on a mix of Nick’s tiny sketches, and the idea of giving the character a slightly more Peter Cushing look.

My second attempt at a head.

If you think this isn’t too bad, don’t be fooled.  While it’s a huge improvement on my first attempt, this is just the best test lighting render that came out.  Prepare yourself for zombie Doctor! 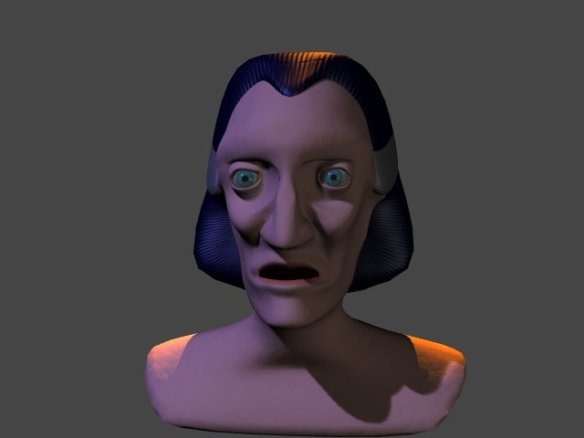 Very harsh and more than a bit creepy

The open mouth is to give me an easy area to select when setting up facial animation controls, the lack of teeth is because you don’t bother building those bits until later, and this was just a rough test.  Aiming for Geoffrey Bayldon and Peter Cushing’s love child was all well and good, but because of the sharp lines in his face it required a lot more subtlety than I put into the model.  But a lot of this early stuff was done in an enormous hurry and on the fly, so I’m not going to be too hard on myself.  Also, I was working from very small sketches, and I need a lot of detail if I’m to copy something.

A couple of days later, Nick Stathopoulos was in Melbourne and came to stay with my wife and I.  During Nick’s varied career, he worked for Hanna Barbera for a while and knows how to simplify something so it will work for animation.  He has a gorgeous design sense, but he hadn’t work with 3D computer models.

So we sat down together. From memory I started building a head from scratch, showing him how I did it while he basically told me what he wanted.  I recall he was fascinated by the process and likened aspects of it to traditional sculpting.  Once we had the basic head built, he got me tweaking things here and there, giving the Doctor a much more gentle and loveable look.

Nick’s a perfectionist, and once we got down to the point where I was nudging individual vertexes and polygons, it was getting kind of hard for both of us.  I was moving individual points under instruction, and it wasn’t fun for either of us.  Fortunately Nick’s a quick study, and I had been talking him through what I was doing, so he took over.

It really was just him shifting single points a millimetre this way, then half a millimetre that way – for the next hour!  But I watched as he took a character head that was already pretty damned good, and gave it a real personality.  This came again from his animation background – you have to do more with less, so one of the tricks is to imbue your initial design with the personality you want to project – that way you don’t have to do extra work to bring those inherent aspects of the character across.

Anyway on the 23rd of December, we created this version of the Doctor between the two of us.

Much easier on the eye.  No extraneous detail that would cause problems with animation, and loads of personality.  I wish I’d kept the first version of this model, just so I could render it up and you could see the subtle differences between that version and this one.  I remember being stunned at the time how a bunch of tiny but exact changes to a handful of vertexes could make an already good model sing!

This is a lighting test, as noted above.

We never went beyond this model, done so early on.  The main reason for that was I was putting all my efforts into story scenarios, the bible, and so on.  More on that in later posts.

At one point in 2003, Cliff mentioned commissioning Nick to do a full clay model which could be 3D laser scanned. Talked to Nick about price, he came back with a perfectly reasonable figure, but given we were still expecting to be canned at any point, and the money would have been coming out of our own pockets, we decided against it.

There may have been other changes made, but to me, for so many reasons, this is the definitive look for the animated Doctor in our show.  His face is gentle, with mild humour, and lends itself to a range of expression.