This is going to be a crazed, foamy-mouthed, only slightly coherent rant. There will be much swearing. You have been warned.

I think one of the issues I have with New Who, other than I sometimes find the writing lazy [1], is the emphasis on the female companions. This emphasis is not from the production team, I’m assuming, but from the marketing.

Now, you’re probably sitting there going, “Um… Danny, you poor misguided slut, the old series was chock full o’ female companions.” Yes it was, but for most of the series’ history, it often had a male companion travelling with the Doctor, or not far off i.e. the Brigadier was right there for most of the Pertwee era. From 1963 through to 1975 there was at least one story a season featuring a recurring male companion. Leaving out K9, who was introduced in 1977, the next run of male companions went from 1980 through until 1984.

All these guys have been considered companions. You wouldn’t produce say, a Best of the Companions of Original Doctor Who Special and not mention Ian, or Jamie, or the Brigadier.

But that’s what happened with the New Series Special on the Companions a few years back. No mention of Mickey or Captain Jack. At all. It was all Rose, Martha, and Donna.  This despite the fact that the New Series had a reasonable stable of semi-regular male companions.

The emphasis in modern Who is on the females. Yes, we now have a married couple in the TARDIS, but the focus is overwhelmingly on Amy over Rory [2]. Rory is seriously one of the best male companions ever – compassionate, intelligent, and ready to call the Doctor on his behaviour. But Rory has yet to have an episode truly focusing on him.

Or, more importantly, an action figure.

How many Martha Jones figures were there? Hell scratch that. How many bloody Cyberman variations have been made? Jesus, they even made two versions of Professor bloody Bracewell! Not to mentioned the Cassandra and Destroyed Cassandra figures.

I wish I had Photoshopped up this image up, but it’s real.

I’m not blaming this slant with regards to the merchandise on the production team, but on whoever looks after the licensing. I get it, a company goes, “We want the license to produce 147 products with the Doctor and Amy Pond on them, here’s a wad cash,” and the BBC go “Thank you! We were getting a bit skint!”

But would it hurt to occasionally say, “Um, that’s great, but y’know Rory has been in the show for 3 years now. The actor’s name is in the opening credits.  So maybe it’s time for you to think about one or two Rory items?”

And even the classic series figures. Much as I like Nicola Bryant and Louise Jameson, how many bloody Peri and Leela figures do we need, anyway? Dammit, I want Ian and Barbara. Hell, you should be able to get five variations based on Barbara’s cardigans alone! And Ian changed his clothes pretty regularly too!

I’d even buy the Dalek Invasion of Earth Remote Controlled Dustcart toy to put my Barbara Wright figure in!

I’ve heard Character Options are in fact having some money issues. I would respectfully suggest that if they concentrated less on releasing over half a dozen versions of Tom Baker, and more than a dozen versions of Matt Smith, they might actually sell a few more toys. Much as I love the Doctor, there’s only so many versions of the character I want [3].

And what the hell is it with releasing the crap figures and not the cool ones? Let’s see… would I buy a Stone Roman Auton figure, or a Dream Lord figure? Do I want Hawthorne & Peter the Winder, or would I maybe perhaps prefer the kick-arse Queen of Starship UK?  Would I rather buy a Peg Soldier, or Madame Kovarian?

Do I want a fucking Weeping Angel holding the fucking Doctor’s Jacket, or a fucking figure of fucking Rory Williams?!

If it’s a money thing, then fine, take one of the two Roman Soldier variants you released and just sculpt a Rory head and pop it on. No one will complain, I promise you!

The really, really astoundingly stupid thing about this? Most toy producers don’t release female character dolls because they say they don’t sell to their target audience of young boys [4]. But they are given a male companion, who on occasion has carried a sword or even had a mother-fucking gun for a hand, and they don’t release a toy of him! 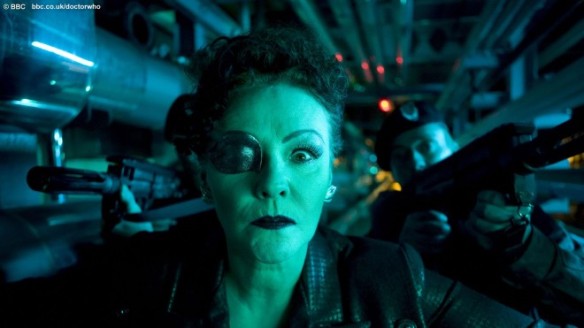 Sorry, but boys won’t buy a Madam Kovarian figure, because it’s female. And we all know, not only is this 100% true, but that girls never buy action figures.

The Doctor used to be essentially sexless.  It was great for a lot of people because here was a male character who not only used his brains instead of guns, but wasn’t constantly dealing with romantic situations.  While I didn’t mind the thing with Rose, it seems to have infected the whole attitude to the show and what it’s about. It’s now about the Doctor and the girl, not about the Doctor and his friends.

As I mentioned earlier, I first noticed this emphasis a few years back. And it’s one of the things that I find a constant background annoyance.

It’s a shame my first New Who post on this blog has been a negative rant, but I’m afraid there will be more, as well as a few celebrating the things that New Who has gotten resoundingly, magnificently right.

1. Yes, lazy. Or if you find that offensive, then what say we agree on ‘exceedingly poor.’ Not all of it, of course, but there’s some really notable instances of a lacklustre attention to detail, or even good storytelling. And there are, of course, some utterly brilliantly written stories as well – which only serves to make the bad writing stand out all the more. BACK TO POST

2. To the exclusion of realistic or intelligent characterisation.
In the story where Amy turns into bitter survivor because she was left alone for 30+ years, there is not a single mention of Rory’s 2,000 year stint. That’s totally ridiculous.

I’m not saying that Rory needed to take Amy to task, but there could easily have been a moment where a confused Doctor says quietly to Rory, “But you waited two millennia and didn’t get all angry,” to which Rory could reply, “I had a goal beyond just surviving. She didn’t know if we’d ever be back.”

Ignoring this aspect of Rory’s past is slack. BACK TO POST

3. Trying to appeal to the mad collectors who must have every variant is a mug’s game. Produce a couple of definitive figures, keep them in production, and occasionally produce a limited variation run. The people who just want a good figure can buy it whenever they wish, and the collectors can scramble for their special figures.

At the time of writing, there are literally 14 different Matt Smith figures from a total of 22 stories. This is a ridiculous level of saturation and overkill. BACK TO POST

4. Let’s not even get into the whole stupidity of gender roles and toys. My son and daughter play together and share each other’s toys. Whether the toy is aimed towards males or females doesn’t matter to either of them – it all comes down to what they want to play with at the time. BACK TO POST BEFORE MY HEAD EXPLODES!

2 thoughts on “New Doctor Who – Forgetting the Boys”